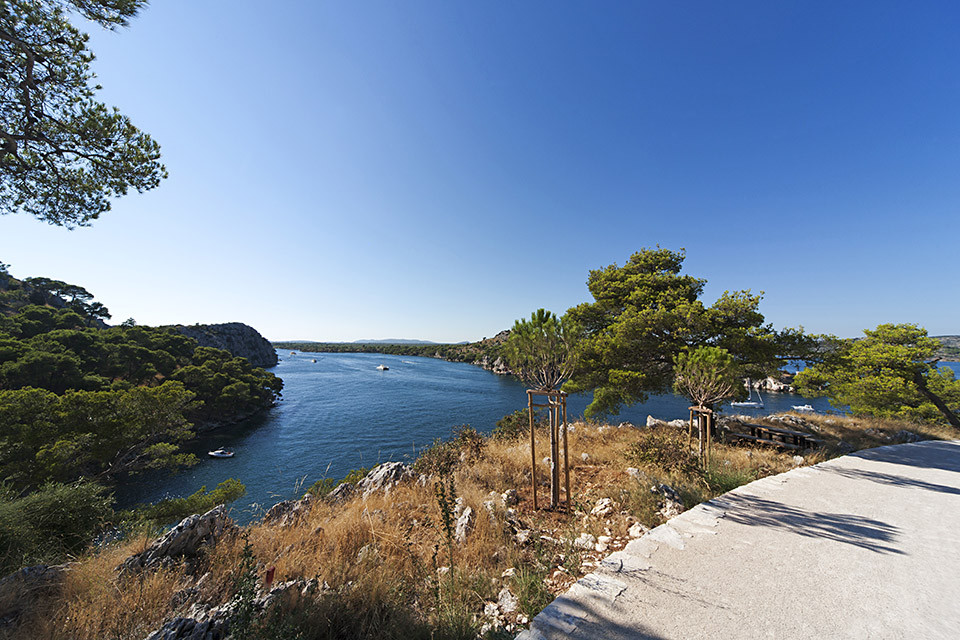 The St Anthony’s Channel is part of a wider location called Channel – Port, which represents a significant landscape protected in 1974. It is more than 2000 metres long and 140 – 220 metres wide. It is a gateway to the open sea and entrance to Šibenik. At the same time, the channel represents a symbolical end of the Krka River, since it is where the river flows into the Adriatic Sea. It can be seen from all parts of Šibenik and despite being in close proximity to the city and easily accessible, it used to be isolated and unknown due to historical circumstances.

Apart from the obvious natural attractions and a magnificent panoramic view of Šibenik, the Šibenik archipelago and St Nicholas’ Fortress, the channel treasures numerous cultural and natural values.

At the entrance to the channel there are ruins of the old towers constructed between the 14th and 16th centuries, with an iron chain that used to prevent enemy ships from entering the port. While following the steep cliffs towards the exit of the channel, you encounter an attractive undersea tunnel which was built by the Yugoslav Army. The tunnel was dug into the bedrock and it is several hundred metres long. In its immediate vicinity there is an old pier and a cave in which there was a small church dedicated to St Anthony. Towards the exit of the channel the steep cliffs are replaced with some beautiful coves inviting you for a swim and relaxation. On the eastern side of the channel, just in front of the cove and Škar Beach, the Yugoslav Army built a military complex comprised of barracks, warehouses, jetties and related infrastructure. These objects are abandoned but they have tremendous potential.

At the exit of the channel towards the open sea there is a pearl among Venetian fortifications – St Nicholas Fortress. This fortress, almost completely surrounded by the sea and largely preserved in its original form, is one of the most attractive fortifications in the Adriatic.

The natural value of the channel is associated with its geomorphological features and typical Mediterranean vegetation. Most of the vegetation has been destroyed by numerous fires over the past several decades, so its restoration is one of the project activities.